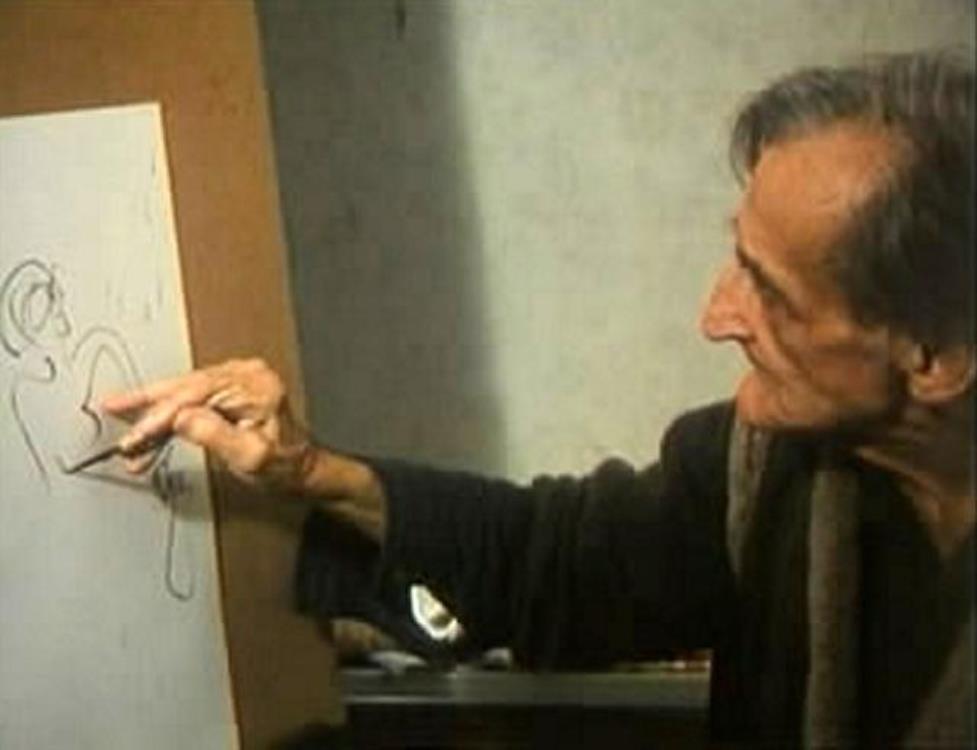 The donated works represent those links in the understanding of Antun Motika's artistic maturation, which facilitate the analysis of his later works, especially the comprehension of his inclination toward modelling, experimenting and exploring light effects, in both painting and in sculpture. Forming part of the artist's estate that was donated by his nephew, Dr. Dušan Motika, and having documentary a value today, are preserved works (paintings and drawings) from the period preceding Motika's academic studies, i.e. from the period when he attended primary and secondary school. Small clay ﬁgures, which had also been preserved, unfortunately disappeared during the movefrom Pazin to Rijeka. His watercolours, gouaches and temperas - not so much the oil paintings from the period between 1929 and 1940, place Motika among the European Post-Impressionist Intimists. This particularly applies to the paintings created following his stays in Paris in 1931 and 1935. Some of the works from that period are part of the donation, all of them characterized by an airiness, abundance of light, simplicity of motif, highly reduced colours and a nostalgic atmosphere. The larger works, and there are about 15 50 drawings and sketches in total, present Motika as an exceptionally modern artist, almost too modern for his time. For the most part these are sketches and designs for glass and ceramic sculptures. Once the gallery (or museum) with a permanent exhibition of Motika's works on an area of several hundred square meters is established, these drawings and sketches will be a true revelation to the wider public and serve art educators of new generations of schoolchildren and students as practical teaching grounds. In one place, the visitor will be able to see a rich scope of academic drawing, from the reduction of the solid line and the simpliﬁcation of the motif to the subdued suggestion of the depicted form, perceptible even where the line disappears. In  Motilka's experimental phase, his drawings turned into pure abstract forms. The donation also comprises four sculptures, two in glass and two in terracotta, ﬁve larger and ten smaller bronze medals, twenty aluminium foils and ﬁfty painterly experiments. Particularly Valuable are twenty acquired albums - thirteen containing small-format drawings, four with photo collages, one album of photographic experiments and two illustrated story books (Redbeard and Iourney to the Moon), created in the Pazin Secondary School. Had the donation not been established, the acquisition of these albums probably would not have taken place either. 'l`hus these two events should be regarded as a whole. After 32 years MOTIKA has ﬁnally “happened” in Pula. In 1974, the Zagreb Modern Gallery set up a retrospective exhibition of Motikais oil paintings, gouaches and watercolours. The exhibition was curated by art historian Professor Darko Schneider. Only a year later, the Labin Public Museum, the Rijeka Modern Gallery and the Piran City Gallery presented a retrospective selection of Motika”s works. The exhibit was also transferred to the Regional Museum of Rovinj and the Pula Showroom. On this occasion, I had the opportunity to meet the artist, who clearly expressed his wish to donate part of his works to his native city under certain conditions. The City Council of Pula formed a working group which was to negotiate these conditions, ﬁnd a suitable space for the permanent exhibition, and have it adapted according to museological standards. Ofﬁcial cars headed for Zagreb several times,carrying persons whose names are of no consequence here, especially in view of what they achieved. I had the impression that someone must have pursued a strategy of delay. In 1983, curated by Professor Gorka Ostojić-Cvajner, Motika's drawings were presented within the framework of the Yugoslav Film Festival, which incorporated an Exhibition Salon, and a Symposium was organized in cooperation with the Chakavian Assembly and the Zagreb Modern Gallery, marking the author's 80th birthday. At the occasion, Motika took the opportunity to reiterate his readiness to donate his works. And it seemed that ﬁnally “he was ours”, that the ﬁve thousand pieces - oil paintings, drawings, sculptures and experiments - would be brought to Pula in a matter of days. This was also what the persons entrusted with the implementation of the plan had promised, but apart form several trips to Zagreb and back - nothing happened. This time the project was stalled until the artist's death. The present, third attempt was successful, owing to the good will of Dr.Dušan Motika, the artist's nephew, who declared himself willing to donate the works he inherited, and thanks to the correct treatment of cultural heritage by the Pula City Administration, especially its Culture Department.

More info on the page in Croatian language